The dubious promise of bioenergy plus carbon capture 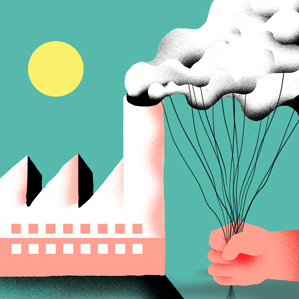 While many scientists and climate change activists hailed December’s Paris agreement as a historic step forward for international efforts to limit global warming, the landmark accord rests on a highly dubious assumption: to achieve the goal of limiting the rise in global average temperature to less than 2 °C (much less the more ambitious goal of 1.5 °C), we don’t just need to reduce emissions of carbon dioxide to essentially zero by the end of this century. We also must remove from the atmosphere huge amounts of carbon dioxide that have already been emitted (see “Paris Climate Agreement Rests on Shaky Technological Foundations”).

Doing so will involve “negative emissions technologies”—systems that capture carbon dioxide and store it, usually deep underground. Such technologies are theoretical at best, but they are considered critical for achieving the Paris goals. Of the 116 scenarios reviewed by the Intergovernmental Panel on Climate Change to achieve stabilization of carbon in the atmosphere at between 430 and 480 parts per million (the level considered necessary for a maximum 2 °C rise in temperature), 101 involve some form of negative emissions.

There are basically two ways to eliminate carbon from the atmosphere. One is to capture it from the air. Technologies to do so are still in their infancy and, even if they do prove practical, are likely decades away from deployment—far too late to achieve the goals of the Paris agreement (see “Materials Could Capture CO2 and Make It Useful”). The other is to rely on plants to capture the carbon dioxide, then burn the plants to generate power (or refine them into liquid fuels such as ethanol), and capture the resulting carbon emissions. Known as “bioenergy plus carbon capture and storage,” or BECCS, this cumbersome process is receiving renewed attention in the wake of Paris. But there is no guarantee that it will ever work.

Large amounts of biomass would be produced from fast-growing trees, switchgrass, agriculture waste, or other sources. The biomass would then be turned into pellets for burning in power plants—either on their own or as additives. The resulting emissions would be separated using carbon-capture technologies that have been proven at small scale but have never been applied economically at anything like commercial scale. Finally, the carbon dioxide would be stored in deep-underground aquifers, presumably permanently.

While each of these steps is technically feasible, neither has proven to be successful at a large scale. Although there are dozens of projects that use biomass, either alone or in combination with other fuels such as coal, for producing electricity, there are serious doubts about the economic viability of the sector, the availability of biomass supplies to support growth, and the life-cycle contribution of such facilities to greenhouse gas emissions. Ambitious projections for carbon capture and storage programs, meanwhile, have proven unrealistic, and there is little indication that such systems will become economically viable in the foreseeable future.

What’s more, although the full BECCS process is often touted as carbon-negative, there are several faulty assumptions in that characterization.

The first is that sufficient amounts of biomass could be produced to displace a significant percentage of fossil-fuel produced electricity, and that producing those amounts would be carbon-neutral. Advocates assert that because plants capture carbon from the atmosphere, burning the plants and releasing the carbon back into the atmosphere does not result in a net gain. That is nominally true, but it doesn’t account for the energy required for growing, harvesting, processing, and transporting the biomass, and it diverts land from other purposes, including food crops, that will become more urgent as the human population surges toward nine billion.

The most prominent BECCS project currently underway is Archer Daniels Midland’s project at Decatur, Illinois. The project has been years in development. “Permitting has been a long and complex process,” says Scott McDonald, the project manager. And it still awaits final approval from the U.S. Environmental Protection Agency. Once it’s complete, the captured carbon will not be stored underground but used for enhanced oil recovery in nearby wells. Studies have estimated that about a billion barrels of residual oil could be recovered in the Illinois basin using carbon dioxide for enhanced oil recovery. In other words, a technology advertised as carbon-negative would result in the production of a billion new barrels of carbon-producing fossil fuels—oil that would not otherwise be produced. That is hardly a climate-friendly solution.

Already, some proposed BECCS projects have foundered on these obstacles. In September, Drax, one of the largest power companies in the U.K., pulled out of the White Rose Carbon Capture Project, which would capture 90 percent of the carbon emissions from a 428-megawatt plant that burns coal and biomass. Drax has converted three of the six coal-fired turbines at the site to burn biomass. The fate of the carbon-capture project in the wake of Drax’s departure is uncertain. The experience of “clean coal” projects using carbon capture and storage, without biomass, is similarly discouraging: FutureGen, a highly touted CCS project in Illinois, was finally canceled in February 2015 after multiple setbacks.

In short, BECCS represents the marriage of two technologies, neither of which has proven to be viable on its own. The technology’s “credibility as a climate change mitigation option is unproven,” concluded a September 2014 study in Nature Climate Change led by Sabine Fuss, a scientist at the Mercator Research Institute on Global Commons and Climate Change in Berlin, “and its widespread deployment in climate stabilization scenarios might become a dangerous distraction.”