Risks of large-scale biosequestration as a form of CO2 removal 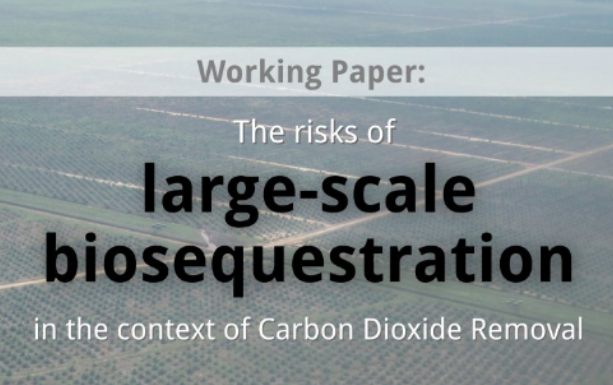 At the start of a major Climate Engineering Conference [1] in Berlin, the Global Forest Coalition [2] has launched a Working Paper that highlights the risks of different proposals for large-scale Carbon Dioxide Removal. The report finds that while the most prominent CDR approach, Bioenergy and Carbon Capture and Storage (BECCS) technology is still in a state of “infancy” and is unlikely to be rolled out on a global scale, biosequestration in the form of afforestation through monoculture tree plantations is already rapidly expanding and causing significant negative social and environmental impacts..

The Paris Agreement’s target of limiting global temperature rise to 1.5 degrees is largely dependent on CDR approaches and climate finance institutions are already supporting such afforestation schemes, largely due to the strong emphasis on private-sector involvement in climate finance mechanisms such as the World Bank’s Forest Investment Program.

“Large-scale biosequestration almost always involves the establishment of monoculture tree plantations on land that was formerly used for other purposes like agriculture or pasture” says Oliver Munnion, one of the authors of the report. “The transformation of land to monocultures causes adverse ecological and social impacts such as the loss of biodiversity, land degradation, changes in hydrological cycles, elite resource capture, conflict and violence against mostly poor and vulnerable communities.”

The report describes existing trends in the field of large-scale biosequestration. It examines the social and ecological impacts of such projects and discusses whether or not these are viable climate solutions. It also showcases successful community led biosequestration alternatives which could prove to be more effective in reversing climate change and in providing long term sustainable livelihoods. “It would be a smarter and more cost effective choice for policy makers to support community-based forest restoration initiatives, but sadly the strong influence of corporate interests in climate policy has caused governments to prioritize subsidies for commercial tree plantations over these community-led projects” says Dr. Simone Lovera, director of the Global Forest Coalition.