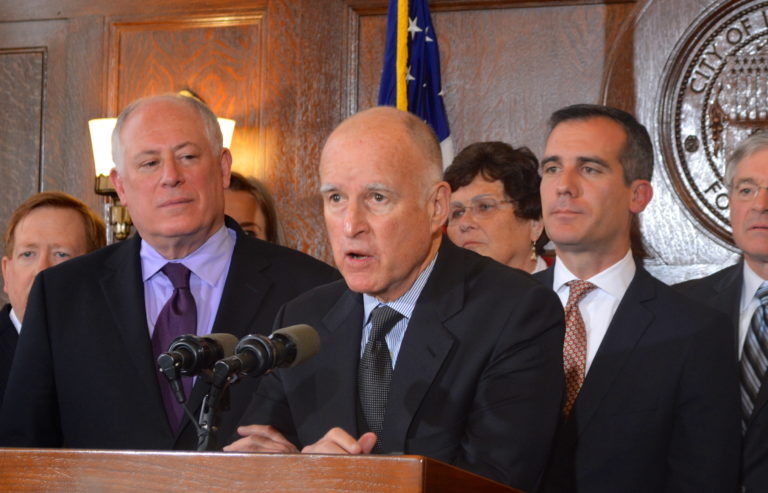 On climate issues, California governor Jerry Brown has been “hailed as the ‘anti-Trump’” for his efforts to keep the United States government committed to the 2015 Paris Climate Accord. So when California recently hosted the Global Climate Action Summit, and made big, vague announcements of “net zero by 2045” it was easy to see it as a salvo from coastal progressives aimed straight at the heart of the “drill baby drill” set backed by the fossil fuel industry.

As the New York Times reported, the summit’s slew of announcements “typically came from liberal cities and blue states like New York and Washington” were mostly aimed at “[t]rying to persuade the rest of the world that the United States hasn’t completely abandoned the fight.”

Geoengineering refers to theoretical large-scale technological interventions to address planetary emissions without reducing emissions from fossil fuel use. These include Carbon Dioxide Removal – attempts to capture carbon emissions and store them underground or in the oceans – and Solar Radiation Management – various proposed techniques of reflecting sunlight back into space to cool the planet.

Politically, sucking carbon out of the atmosphere is more palatable than blocking the sun. However, carbon capture technology widely understood to be unlikely to develop to do what governments are already promising it can do, so the end game of any geoengineering scheme is Solar Radiation Management – reducing sunlight on a global scale, with very difficult-to-estimate consequences.

Many on the fossil-fuel right see little trouble shifting quickly from climate denial to geoengineering advocacy. Conservative mainstays like the American Enterprise Institute and the Cato Institute have backed the idea of a climate technofix.

But it’s Bill Gates and a growing number of Silicon Valley figures who are actually leading the charge in implementing geoengineering. The multi-billionaire Gates and a number of wealthy hedge fund players have financed the group led by Harvard technologist-entrepreneur David Keith, one of the leading proponents of Solar Radiation Management.

Keith and company are planning to defy an international moratorium on real-world use of geoengineering techniques by conducting experiments near Tucson, Arizona in the coming months. The “Stratospheric Controlled Perturbation Experiment” (SCoPEx) plans to spray chemicals into the stratosphere to begin developing techniques to block the sun.

Keith’s project is joined by other attempts to develop sun-blocking technologies originating in Silicon Valley, including a proposal to spread tiny glass bubbles on ice in Alaska, and to fill clouds with seawater mist on the California coast (the latter also backed by the Gates Foundation).

So far, attempts to develop a global mechanical sun block in Arizona project have received very little attention from California’s “anti-Trump” governor. While Brown skirted any direct mention of geoengineering at the summit, many others have rushed in to draw the obvious conclusion: Carbon Dioxide Removal is implicitly enshrined in promises of “net carbon negative emissions after 2045”.

That puts California – and everyone else – on a path to adopt last-ditch sun-blocking SRM technologies when Carbon Dioxide Removal fails to fulfill its promises over the next decade or so.

If carbon capture continues to creep in around the edges and leaders like Brown don’t oppose blocking the sun, it means they see it only being a matter of time before we give up on the former and implement the latter.