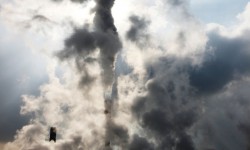 “Save the world and make a little cash on the side.” That’s the motto of Russ George, the colourful entrepreneur behind Planktos Science who wants to put geoengineering into practice now. George is convinced that by adding iron sulphate to the oceans, he can stimulate plankton blooms and so suck enough carbon dioxide out of the atmosphere to offset human emissions from burning coal and oil.

In 2007, backed by a Canadian real estate developer, the Planktos ship set sail from San Francisco bound for the Galapagos Islands and loaded up with iron sulphate. George was going to make a killing by selling carbon offsets to whoever wanted them.

George believed, and told whoever asked, that ocean fertilization could become a $100bn business and hinted to journalist Jeff Goodell that America’s biggest coal-burning utility was interested in buying his carbon credits.

The venture soon collapsed, leaving a cloud of mistrust hanging over all research into iron fertilisation. Not long after Russ George set the regulatory alarm bells ringing, the London Convention, which regulates ocean dumping, and the Convention on Biological Diversity both passed resolutions banning iron fertilisation experiments except under restrictive conditions.

Rogue geoengineers like Russ George drive respectable researchers crazy, not to mention those business people who think there really are profits to be had from a plan B. On this question, last week’s report by the US National Research Council (NRC) stresses that carbon dioxide removal is expensive and limited by “technical immaturity”.

A range of companies have identified business opportunities in technologies designed to remove carbon dioxide from the atmosphere and store it somewhere more or less permanently. Those who believe they can profit from carbon credits because polluters with emission caps will pay for them point to the Kyoto Protocol’s Clean Development Mechanism, which allows parties to meet their emission reduction obligations by paying developing countries to grow forests onto land cleared long ago.

More trees means more carbon dioxide soaked up in vegetation rather than in the air, at least for a time. However, worried about the verifiability and permanency of carbon dioxide stored in trees, the European Union does not allow credits generated that way to be traded in its emissions trading scheme.

And the commercial promise of other methods of carbon dioxide removal is likely to be very limited. Credits for using giant machines to remove the gas are not likely to be accepted internationally for a long time, if at all, not least because the industrial infrastructure needed for extraction would need to be about as big as the infrastructure that puts it there – oil wells, coal mines, railways, pipelines, power plants, refineries and so on.

Neverthless “air capture” technologies are being developed by firms like Carbon Engineering, a Canadian company founded by Harvard physicist and geoengineering enthusiast David Keith. They are ventures looking for a rationale, but that has not stopped Alberta oil sands billionaire N Murray Edwards and Bill Gates from investing in the company.

The prospects are awful when fossil fuel companies play both sides of the fence – oil companies such as Shell and ConocoPhillips have also put money into geoengineering. Is it ethical for the polluters to promote technologies that may allow them to continue to pollute?

If the promises made by geoengineering erode the political incentives requiring polluters to cut their emissions, will we see fossil fuel corporations begin lobbying to get political endorsement for climate modification?

The ethical and political difficulties deepen when we get to the other kind of geoengineering scheme reviewed in the NRC report, “albedo modification” – formerly known as solar radiation management – schemes to reduce the amount of sunlight reaching the Earth’s surface.

No one will ever make money out of trading emission reduction credits in global dimming. But some commercial outfits can envisage a desperate world paying them princely sums for access to the technology for doing it.

There have been a flurry of patents being issued, 28 at the last count, including one for a hose suspended by blimps in the sky that would spray sulphate aerosols. Branded the StratoShield it’s owned by a firm named Intellectual Ventures, which markets the device as “a practical, low-cost way to reverse catastrophic warming of the Arctic – or the entire planet.”

Among the investors in Intellectual Ventures who perhaps see themselves making a motza from planetary catastrophe are Nathan Myhrvold, formerly chief technology officer at Microsoft, and Bill Gates himself. If the future of the world comes to depend on the Stratoshield, will they play hardball?

So here’s the bottom line: if you want to make money out of global warming invest in energy efficiency and renewable energy companies. They are guaranteed winners and your children will not hate you for it.