Why we shouldn’t fund geoengineering experimentation, and what we still need to learn about the climate 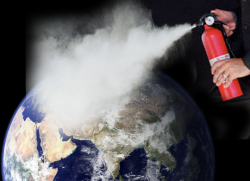 The US National Academy of Sciences has released two reports on geoengineering that recommend investments in solar radiation management (SRM) and carbon capture and storage (CCS). Geoengineering has become known as the US government’s “Plan B” response to climate change. Geoengineering proponents have recently pushed for government funding of geoengineering research in Nature and the Washington Post.

At first glance, this seems prudent: of course we should have more information about all of the options. Most geoengineering backers insist that these are only extreme measures of last resort. SRM (now rebranded as “albedo management” by the NAS report) which proposes blowing sulfate aerosols into the stratosphere to block sunlight and lower global temperatures or CCS, which proposes to stuff billions of tonnes of CO2 into defunct mines and oil wells, are Plan B: only to be considered if governments can’t agree on emission targets in Paris later this year. Is geoengineering deplorable or deployable? We won’t know, backers argue, unless we do the research.

Saying we need more information sounds reasonable, but geoengineering research that involves experimentation and builds actual hardware is a clear and present danger to the climate for two reasons. If the US or other powerful governments accept geoengineering as a plausible “Plan B,” Plan A will evaporate faster than Congressional bipartisanship. The fossil fuel industry is desperate to protect between $20 and $28 trillion in booked assets that can only be extracted if the corporations are allowed to overshoot GHG-emissions. The theoretical assumption that carbon capture and storage will eventually let them recapture CO2 from the atmosphere and bury it in the earth or ocean provides the fossil fuel industry with the best way to avoid popping the “carbon bubble” other than outright climate denial. Spraying sulfates in the stratosphere can – theoretically – lower temperatures until carbon capture and storage techniques are viable. In other words, geoengineering research is becoming the only tool the fossil fuel industry has left to undermine the political and corporate will to lower actual emissions now.

Geoengineering could justify continued emissions, but it may also do direct damage to the climate. The two NAS reports are quiet about budgets and don’t define the scale of field studies. Most scientists concur that geoengineering is extremely risky, but also say that only very large field trials will yield useful data. Experimentation, in other words, equals hardware development and effective deployment. We already have examples: between 1993 and 2009, 11 governments conducted a dozen geoengineering experiments in international waters to see if spreading iron particles on the surface of the ocean could lead to the sequestering of carbon dioxide on the ocean floor. The first experiments dumped iron into 50-60 km² of ocean. When that didn’t work, they increased the surface area six-fold until the final 2009 dump was 300 km². It still failed. The geoengineers wanted bigger experiments, but three different UN conferences intervened and have effectively banned ocean fertilization. Sagely, the NAS report now concludes that ocean fertilization “is an immature technology whose high costs and technical and environmental risks currently outweigh the benefits.”

NAS also talks about the need for governance but only in the context of the United States. Stratospheric aerosol spraying can be undertaken by one country or a “Coalition of the Willing,” even though the impact will be global. For this reason, the United Nations must be in charge.

What about Plan A?

There is much that scientists don’t know about planetary systems. The acknowledged gaps in Plan A research have widened from a crevice to a chasm to a canyon. It would be extraordinarily foolhardy for policymakers to advance Plan B before Plan A’s research issues are addressed.

It is difficult, for example, to establish Plan A emission targets (or, for that matter, Plan B’s levels of stratospheric aerosol spraying) when governments don’t disclose their current emissions. China underreported its annual GHG emissions by about 20%, while the USA’s recent emission reductions aren’t quite what they’re fracked up to be. America cut back its emissions to 1992 levels because fracking lowered the demand for coal – but the coal was still burned overseas. The UK’s 14% reductions (between 1990 and 2008) in greenhouse gas emissions were erased by its 20% increase in emissions from outsourced manufacturing. With the breakup of the Soviet Union, Russian emissions dropped 10 – 14% but only because farmland was temporarily abandoned.

How can we pursue “climate interventions” and call them scientific if governments don’t get the data right?

Governments have also had difficulties keeping track of their biomass, with implications for Plan B’s carbon capture and storage strategies. According to a UNEP report, up to 30% of all timber exports are mafia-controlled and 90% of tropical deforestation is due to illegal trade – making biomass calculations problematic. Meanwhile, India overestimated its forest cover by about 10%.

Australia, Canada, Japan and New Zealand have all flip-flopped on their emission commitments while the UK has cut back its renewable energy support. The EU’s carbon credit scheme is a laughingstock. This makes Plan A’s emission goals – or the levels of Plan B’s stratospheric aerosol interventions – subject to unexpected and dangerous changes.

Plan A and Plan B both need cutting-edge monitoring of planetary systems. However, by 2020, the number of civilian US climate monitoring satellites could drop from 23 to 6 and the number of monitoring instruments from 90 to 20. Monitoring is weakest over the Indian subcontinent and apparently deteriorating throughout the tropics. In 2014, for example, scientists discovered that an important swath of the Brazilian Amazon has been completely missed by satellites. The Economist called this “willful blindness.”

Recently, science has uncovered a vast deep-ocean “river”, a bacterial prairie the size of Greece beneath the Humboldt current, and reconsidered the impact of sulphates on cloud formation in polar regions that could significantly alter Plan B proposals for carbon sequestration or solar radiation management.

Money is indeed needed for climate change research. Governments should pony up and scientists should get to work. But the NAS needs to flatly condemn the deployment or hardware testing of dangerous technologies that have consequences for the whole planet.”

NAS support for geoengineering research creates a political space that could lead multinational oil companies and their governments off the hook. Precisely at the moment when climate denial is losing steam, it’s crucial to prevent it from being replaced with unicorn-like fantasies of magical technologies that allow the status quo to continue.

Pat Mooney is the Executive Director of ETC Group.