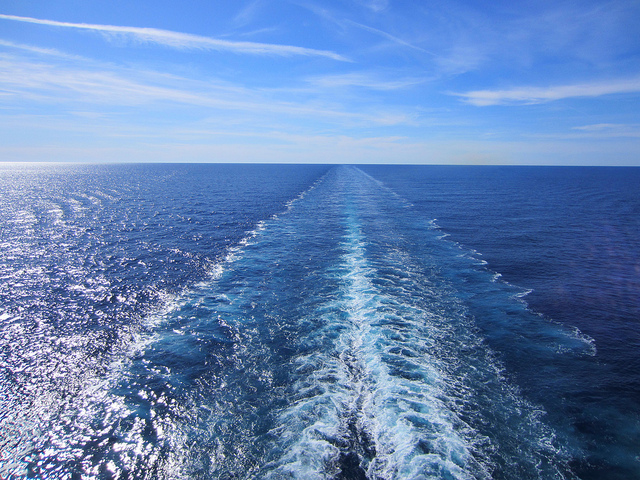 An article published in January by the Journal of Geophysical Research and covered briefly in Nature describes how brightening and extending the lives of ship wakes can be used to alter the albedo of the oceans, and cool global temperatures. It adds ship wakes to a growing list of Solar Radiation Management techniques.

The theory is based on extending the lives of the microbubbles generated by ship movements from the minutes that they currently last, to days. These bubbles are created by “surfactants”, and their lifetimes in sea water “are strongly dependent on the amount of natural surfactant (surface-active carbohydrates, proteins, and lipids often derived from phytoplankton) and amphiphilic nanoparticles which help stabilize microbubbles.”

Therefore, the study suggests, to achieve global cooling on the scale and scope required, extra surfactants would need to be added to ship wakes, and additional shipping movements would need to account for the fact that there are far more wakes in the Northern Hemisphere, than the Southern.

The most obvious flaw is that the study doesn’t mention what these surfactants could be, or what their effect on the oceans would be. The “assessment of the amount or type of surfactant required is beyond the scope of this study, as is the assessment of undesirable side effects from the addition of surfactant.” However, this is tempered by the statement that the surfactants would need to be benign, and not harmful ecologically as, otherwise, “surfactants may be microbially and photochemically processed with undesirable impacts on ecosystems”.

Granted, this study was just a modelling exercise, playing with changes to sea surface albedo. On the face of it, perhaps it’s a good idea to look into making seemingly small tweaks to already global phenomena, to counteract global temperature rises. The fundamental problem though is that ideas such as this one are being taken increasingly seriously by policy-makers, and encouraged by corporations wanting to maintain the status quo.

This kind of study could well inform policy decisions, despite the glaring omissions from it. For example, without knowing what the surfactants would be, or what volumes would be required, or indeed what the impacts of substantially increasing shipping in the southern hemisphere would be, studies like this should not be taken seriously. Natural surfactants may be derived from phytoplankton and marine processes, but they can also be highly toxic, and indeed carbon intensive in their production. Likewise, the contribution of shipping to global anthropogenic CO2 emissions is close to becoming the largest single source after cars, housing, agriculture and industry.

The BP oil disaster in the Gulf of Mexico is a case in point. The oil dispersant BP used was a mixture of two surfactants. BP of course claimed that the chemicals were safe, and the EPA didn’t even require any safety testing prior to its use. A record 1.8 million gallons were used to disperse the oil, and it potentially killed more sea life than the oil would have destroyed by itself. This is an example of what “technofixes” of this kind could mean in practice, especially if put in the hands of irresponsible companies, or unscrupulous government agencies.