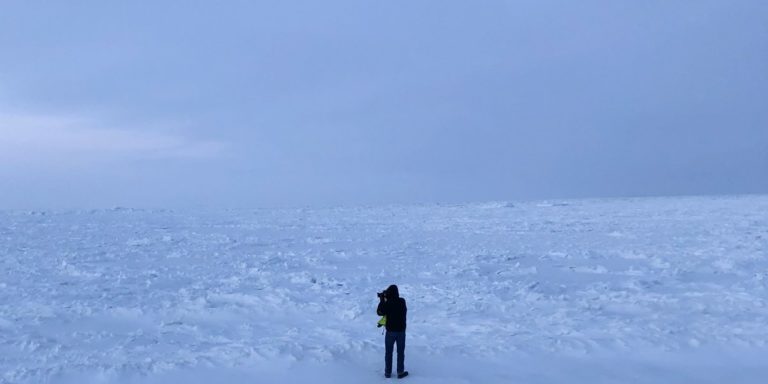 An Arctic Indigenous organizer says that when it comes to the geoengineering project Ice 911, local community members have little to no knowledge of the experiments taking place on their lands. Community members say they have not consented, and have concerns about the experiment’s impacts on a local ecology already reeling from the impacts of multiple extraction projects on delicate ecosystems.

The Ice 911 project is an attempt to experiment with the preservation of Arctic sea ice by covering it with a layer of reflective silica “microbubbles”. The project’s leader, Leslie Field, suggests that this technique could be used on a massive scale to slow the melting of Arctic Ice, preventing sea level rise. At that scale, the project would be spreading tonnes of glass bubbles in the arctic ocean, and could change global weather patterns in unpredictable ways. (For more information, read our briefing on Ice 911.)

Adrienne Titus is an Inupiaq community organizer with Native Movement in Fairbanks, where she advocates for social and environmental justice and supports the practice of traditional knowledge. She is originally from Unalakleet on the Norton Sound, and supports the work of  many Arctic communities, including Utqiagvik (sometimes called Barrow), where the Ice 911 project is conducting its research.

For northern communities, climate change is a daily, dangerous reality. “There’s erosion on the coast and the permafrost is melting,” said Titus. “We just had somebody about a hundred miles north of Unalakleet fall through the ice a couple of days ago – that’s unheard of for this time of year… there were two hunters that were killed in Barrow bringing back their whales.”

Rather than a solution to rapid climate change, Titus  says that geoengineering experiments like Ice 911 are just another risk factor for communities in the Arctic. In a fragile ecology, many things could go wrong with the introduction of millions of tiny glass “microspheres.” The Ice 911 project’s website states: “In 2017, we deployed our material solution on 17,500 square meters (over three football fields) of ice, and in 2018, we deployed 15,000 square meters of material with successful results.” It is not clear what “success” means for Ice911, but it doesn’t seem to include environmental impacts.

Titus questions the impact on the food web. “What happens when this stuff gets in the water, and what effect will it have on the krill and all the other microorganisms that are in the top surface of the ocean? Then the fish that eat them, and all of the other sea mammals and animals that rely on this ecosystem, this area, this water?”

“How safe is it for the migrating birds that are coming in and all of the rest of the connected parts of the world that rely on this ecosystem?”

“These are sacred sites, these are places that we’ve traveled, our ancestors have travelled through time immemorial and it’s not fair to the people that live there, [it disrupts] that sacred relationship.”

Spreading silica glass bubbles over a vast area of snow and ice could have negative effects on plants and animals that have adapted to surfaces of snow and ice. It could directly affect humans as well. “You look at silica dust, and the number one warning is silicosis, which can cause death,” said Titus .

A big part of the problem is a lack of information and consultation. “My understanding is that [Ice 911 project leader Leslie Field] has got a permit from either the city or the native corporation… But I don’t think there’s been consent or knowledge beyond those offices.” Titus encountered many community members who were shocked to hear about the experiment, and who had not been consulted.

“There definitely hasn’t been permission and consent among the people with an understanding of what could occur.”

“That’s concerning to me because a lot of people rely on that land – what if there are irreparable effects?”

The difficulties of staying informed are significant in an area that has long faced a barrage of extraction projects: oil and gas wells, explosions in gravel pits, and other forms of mining. An Obama-era profusion in offshore oil extraction in the Arctic Ocean has been compounded by Trump-fueled forays of seismic “thumper trucks” into the Arctic National Wildlife Refuge.

“There’s already so much development, and it’s so easy to distract people from what’s happening.”

“These are sacred sites, these are places that we’ve traveled, our ancestors have travelled through time immemorial and it’s not fair to the people that live there, [it disrupts] that sacred relationship.”

Titus  believes that Field and the Ice 911 team may have good intentions, but suggests there are some major ethical blind spots in their approach. “They’re giving talks about melting ice impacting the fires in California, presenting in Rome, Zurich, Chile, Washington DC, all over in places other than Alaska – I don’t see any kind of consent from the people that are there in that community.”

“Of course that’s what every scientist aims for, to have that one experiment that puts them in the history books, but I think she’s going about doing it the wrong way. It’s affecting a whole generation of people, because what happens if this is a failed science experiment?”

“It’s another attack on other people there – maybe with good intentions but it’s not in a good way.”

“What happens in the Arctic affects the whole world – we’ve seen that first hand.”

Titus  urges people looking to make a difference for the climate to “oppose these false solutions, look at the big picture and continue to work towards divestment and work towards clean energy solutions.”

“Really look at the big picture and stop trying to profit from these things, because it’s only hurting us, all of us.”

“What happens in the Arctic affects the whole world – we’ve seen that first hand.”

The Indigenous Environmental Network, of which Titus’ organization is a member, is a founder of the Hands Off Mother Earth (HOME) manifesto, which has been signed by 185 organizations around the world in opposition to geongineering and related open-air experiments.