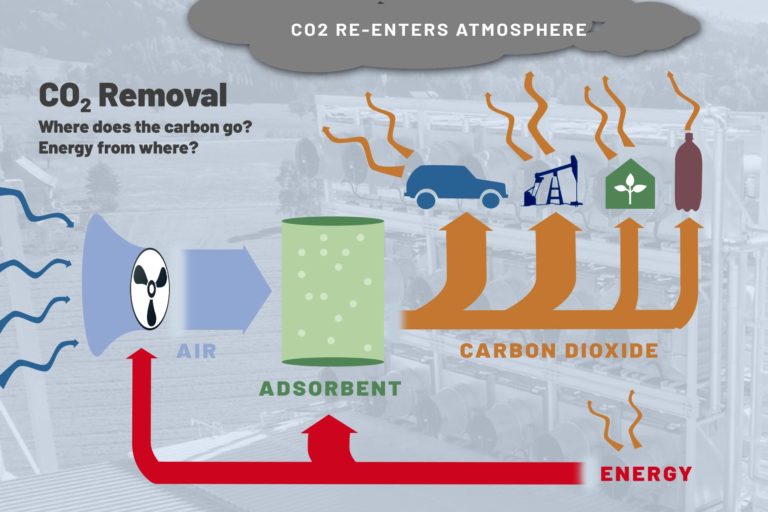 In the early 1990s, the European Space Agency launched a technology to extend space missions by filtering exhaled CO2 out of the air on board of shuttles and space stations. During the past two decades, the technology – known as Direct Air Capture (DAC) – has been further developed, but in a different context: researchers are considering the technology as a means to remove CO2 or other greenhouse gases from the earth’s atmosphere.

Although
little is known about the technology’s efficiency, safety, economic
impacts or the likelihood that it will actually reduce overall carbon
emissions, several companies have already started marketing DAC
as a climate solution, and propose capturing CO2
as a feedstock for industrial uses. Among the marketing concepts:
synthetic fuels, enhanced oil recovery, mechanical trees, and a
sponge mountain.

The
technical approaches to capture CO2
from ambient air involve a filter or absorbent. The Canadian startup
Carbon
Engineering Ltd.
is using a strong hydroxide solution as a chemical absorbent.
Amsterdam-based Skytree
uses
a plastic resin able to act as a CO2
filter. Finland’s Soletair
Power
has developed a solid amine sorbent. Multiple uses of the filter or
absorbent are possible in most cases. Once the filter is saturated,
CO2
can be isolated by applying heat. Swiss Climeworks AG
has
a filter that releases the captured CO2
at 100°C. The Tennessee-based Oak
Ridge National Laboratory has
a method of bubbling air through a liquid sorbent; the CO2
is subsequently released at 120°C.

The Center
for Negative Carbon Emissions (CNCE)
in Arizona developed a synthetic membrane that absorbs CO2
from dry ambient air. The membrane releases the CO2
if exposed to high humidity or if wetted directly. Further technical
approaches are under development, e.g. the Pennsylvania-based
National
Energy Technology Laboratory (NETL)
investigates the electrochemical reduction of CO2
with nanostructured metals.

Despite varied technical approaches, the providers of DAC technology are all racing to lower production costs. In 2018, Carbon Engineering published a research paper, calculating that DAC is possible for US$100 per tonne. It remains to be seen how the theory will be put into practice, as Carbon Engineering’s chemical absorbent needs to be heated to ~900°C to release captured CO2. Climeworks is presently producing at ~ US$ 600 per tonne and plans to bring costs down to US$ 100 by the end of the decade. Global Thermostat explains that bringing down costs to US$ 100 per tonne is possible, if a cheap or free source of heat or energy is available, and adds that federal subsidies are just as important to lower costs of DAC.

Another
point in common is that precise studies of present and future
environmental costs of the technologies are not available. Every DAC
process is energy-intensive. The Climeworks
plant in Hinwil, Switzerland, needs 1.800 – 2.500 KWh
of thermal energy and ~600 KWh of electricity to capture
1t of CO2.
One Climeworks collector can capture 50 tonnes of CO2
per year, six collectors fit into one shipping container. More
than 1.23 million shipping containers with six collectors
each would be needed to capture 1 % of global annual emissions1,
as well as ~800 billion KWh of thermal energy
and ~220 billion KWh of electricity (sufficient kWh to
supply Canada with electric energy for a period of two years).
This calculation does not yet cover the resources and energy input
needed to produce, install and maintain the capture plants. , Details
on the toxicity production and disposal of the CO2 filters or
absorbents in use are not available.

DAC actors
are researching strategies for processing and marketing the
captured CO2.
Most of the companies aim to produce synthetic fuels (which would in
most cases produce new emissions, which would in turn need to be
captured) and valuable chemicals.

Soletair
Power
commissioned a demonstration facility in 2018. The
facility combines DAC, an electrolyser for hydrogen production,
and a synthesis reactor for hydrocarbon production. In 2018, the
pilot plant operated 300 hours, producing 6.2 kg
of oil and wax per day. Soletair’s technology was developed by
the VTT Technical Research Centre of Finland.

In 2019,
the Swiss Synhelion
started testing a small refinery in Zürich. The demonstration
project uses solar energy to extract CO2
and water from ambient air and to split them into hydrogen and carbon
monoxide at 1,500°C. The syngas mixture can afterwards be
processed into hydrocarbons such as kerosene or methanol.
According to Synhelion, a photovoltaic system with an area of 1 km²
could produce 20,000 litres of kerosene a day.

The
German Sunfire GmbH
opened a Power-to-Liquid plant and developed an electrolysis system
for the production of syngas, in 2014. The process needs
electricity for high-temperature electrolysis of water and CO2.
To convert syngas to so-called “Blue Crude” fuel, Sunfire
uses the Fischer-Tropsch process. Blue Crude can be further
processed to produce fuels as methane or diesel. In 2015, the
first batch of diesel fuel was produced. The CO2 – DAC
capture technology used by Synhelion
and Sunfire
was provided by Climeworks.

The
European Union’s Horizon 2020 research and innovation
programme is investigating the potential for producing synthetic gas
and fuels from captured CO2 with
renewable energy as well as energy storage options. The currently
running SUN-to-LIQUID
research project established a demonstration plant at the IMDEA
Energy Institute, near Madrid, to enhance and validate the
production of kerosene from captured CO2 with
solar energy. The project STORE&GO
is carried out by 27 European project partners and involves
three pilot sites, where different power-to-gas technologies are
tested and developed. The pilot plant in Troia, Italy, captures
up to 150 tonnes of CO2 per
year and generates up to 240 m³ of hydrogen per hour.
A power-to-gas methanization unit turns hydrogen into methane,
afterwards the methane is liquefied at -162°C. The objective of
the project is producing liquefied fuel for natural gas tanks, e.g.
for trucks or ships, without depending on pipeline access.

Another
approach being explored and commercialized, e.g. by Climeworks,
Skytree
and Infinitree,
is the use of captured CO2 as
a fertilizer in greenhouses. The American company
Infinitree LLC,
founded by its parent company Carbon Sink (former Kilimanjaro
Energy, former Global Research Technology), is commercializing
a CO2 capture
system for use in greenhouses: CO2 is
captured from ambient dry air and released inside greenhouses with
high humidity.

Global
Thermostat
aims at selling captured CO2 to
soda companies. Climeworks
recently started exploring this marketing channel in the framework
of two collaborations in Switzerland: Climeworks
CO2 – DAC technology
will be used for the Coca-Cola
brand “Valser”,
and for filling gas bottles for sparkling water dispensers
manufactured by the company Carbagas.

In
addition, Climeworks
is offering travel emissions offsets with its DAC technology
storing the captured CO2 underground
in Iceland at the CarbFix
project site. The CarbFix project is a combination of DAC with Carbon
Capture and Storage (CCS). The approach involves capturing
CO2 and H2S at
the Hellisheidi Geothermal Power Plant, nearby Reykjavik. The CO2 is
dissolved in water under pressure, and the solution is injected into
basaltic formations nearby the plant, at 400 m to 800 m
depth, with the aim of storing the gas in mineral form in the
bedrock.

The
DAC sector receives funding from private investors and public
sources. In most cases, the list of private sponsors is not fully
disclosed, or not disclosed at all. For this reason, the below
Table 1 can only offer a brief insight, but not a comprehensive
overview on private investments. The influence of public funding and
research on the DAC sector is displayed in Table 2.

New plans and projects in preparation

In recent weeks, several new projects have been announced.

In Reykjavík a Letter of Intent was signed for thoroughly investigating the technical and financial suitability of the CarbFix method for large emitters in Iceland. The signatories aim to design and construct experimental equipment for CO2 capture from flue gas (DAC) and for CO2 injection underground (CCS), followed by the construction of larger-scale technology. The letter was signed by the Prime Minister of Iceland, Reykjavík Energy, the Aluminium and Silicon Industry in Iceland (Elkem, Fjardarál, PCC and Rio Tinto), and the Ministries for Environment and Natural Resources, for Industries and Innovation, and for Education, Science and Culture.

Carbon Engineering & Oxy Low Carbon Ventures LLC announced their joint plan to design and construct the world’s largest DAC and CO2 sequestration facility in the Permian Basin (Texas, New Mexico). Oxy Low Carbon Ventures is a subsidiary of the international gas and oil company Occidental, the largest oil producer in the Permian Basin. The plant will be located at an Occidental oil field; the exact location has not yet been decided. The captured CO2 will be used for Enhanced Oil Recovery (EOR). Occidental employs EOR since 2010, but up to now, the captured CO2 needed transport, e.g. via pipelines. Presently, the partners are evaluating a DAC plant with a capture capacity of 0.5 million tonnes of CO2 per year. Future plans include multiple DAC plants with twice the capacity.

The Rotterdam Jet Fuel cooperation was signed by the Rotterdam The Hague Airport and an European consortium. The partners aim to develop a demonstration plant with solar energy supply and an annual production of ~0.36 million litres of jet fuel. Climworks will provide the CO2 capture technology, Sunfire an electrolyser to transform the captured CO2 into syngas, and the German Ineratec GmbH the technology to turn syngas into synfuel by Fischer-Tropsch synthesis. The German “EDL Anlagenbau Gesellschaft mbH” will be responsible to convert synfuel to jet fuel, and the Dutch SkyNRG for the commercialization.

The Norwegian Nordic Blue Crude AS released its plan to produce synthetic fuels and other fossil replacement products already in 2017. The company plans the development of ten commercial production sites in Norway, starting with the “E-Fuel 1” – site in Heroya industrial park, Porsgrunn, to be commissioned in 2020. Climworks will provide the CO2 capture technology, Sunfire the technology to produce Blue Crude fuel.

Rob McGinnis, the founder of PrometheusFuels, announced a partnership with Boom Supersonic. The aircraft company plans using the Prometheus fuel for its airline.

Synhelion & ENI, an Italian oil group, announced their first joint commercial plant for 2025. The partners plan to produce methanol from captured CO2 and water. The plant will be supplied with solar energy; a solar reflector with a surface of 0.16 km² has been announced.

Silicon Kingdom Holdings (SKH) aims to commercialize and “plant” 1,200 mechanical trees for carbon capture. In May 2019, the company obtained the rights to commercialize the DAC technology developed by CNCE. SKH has started designing its pilot plant and is presently looking at possible project sites in Arizona and California. At pilot-scale, 1 “trees”, is expected to capture ~2.5 tonnes of CO2 per year. The DAC devices will be up to 10 m high and expose ~150 sorbent-filled discs, each with a diameter of ~1.5 m. After 20 minutes of exposure to ambient air, the discs are saturated with CO2. Discs return into the base of the column, where CO2 is released, either by heat or humidity.

The architect Angelo Renno proposed a 90-metre-high “sponge mountain” for CO2 capture in Turin, Italy. The mountain could be formed out of 6 million tonnes of soil excavated during the construction of the 170-km railway tunnel planned between Turin and Lyon (France). Engineered soil, a mix of sand and concrete, would be added to absorb CO2. The artificial mountain would cover an area of 11 ha and could, according to proponents, be used as a recreation park at the same time.

By 2025, Climeworks aims to capture 1 % of the annual global CO2 emissions and states that 0.75 million shipping containers with six DAC collectors each would be needed to fulfil this goal. According to figures from the European Commission1 for 2017, this number of shipping containers would only be sufficient to capture 0.6 % of global annual anthropogenic fossil CO2 emissions. The annual amount of energy required (618.8 billion KWh), to run 0.75 million shipping containers with DAC collectors would supply more than 75 % of EU-28 citizens with electricity for a period of one year (average consumption 1.584 KWh/capita).