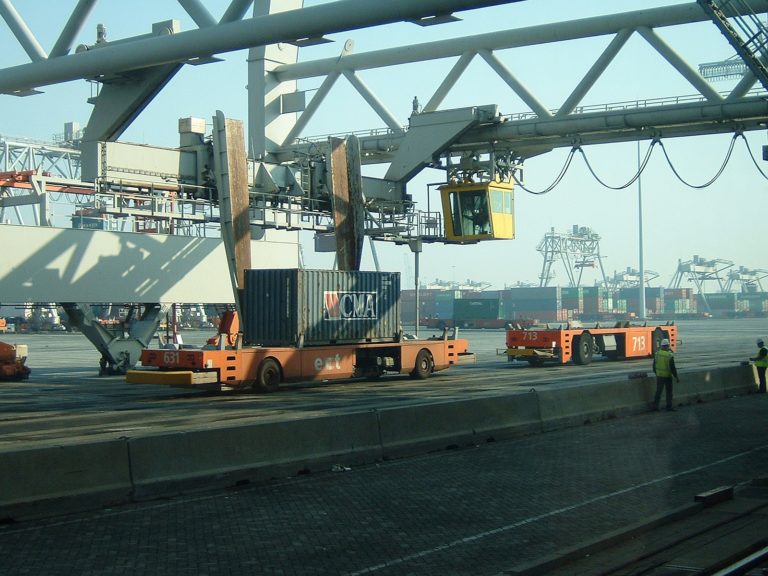 The Port of Rotterdam announced the start of Porthos, a joint project with EBN and Gasunie.  Porthos stands for “Port Of Rotterdam CO₂ Transport Hub & Offshore Storage”. The Carbon Capture & Storage (CCS) project plans to capture up to five million tonnes of CO₂ in Rotterdam’s port area per year, and transport it via a 21 km pipeline for storage in an empty natural gas field off the coast in the North Sea. The project partners also consider supplying a smaller share of the captured CO₂ to greenhouses in the surrounding province of Zuid-Holland, which means the captured CO₂ will be released back to the atmosphere after a brief detour. Construction is scheduled to begin around 2026, the first CO₂ injection for 2030. Lateron, the joint project partners, aim to construct cross-border pipelines to ports in Belgium and Luxembourg (Antwerp, Ghent), while expanding the annual storage volume to 10 million tonnes of CO₂.

The Port of Rotterdam has already seen two CCS initiatives in the past. The Rotterdam CCS Demonstration Project ROAD (former Maasvlakte Project) was operated by E.On, Electrabel and Alstom. The partners planned to capture CO₂ at a newly constructed coal power plant within the Maasvlakte section of the Rotterdam port and intended to transport the captured CO₂ via pipeline to an offshore gas field for storage. The European Union awarded 180 million Euros to the project in 2009, the Dutch government 150 million Euros in 2010. The project was cancelled in 2017 due, among other factors, to the political uncertainty over the future of coal in the Netherlands. The Rotterdam Climate Initiative (RCI) was initiated in 2006 with the goal to half Rotterdam port emissions by 2025, compared to 1990 emission levels. RCI was founded by the Port of Rotterdam, about 20 companies in the industrial port district, the local municipality, and the environmental protection agency Rijnmond. The project partners aimed to capture CO₂ from various industrial sources within the port area and carry it to an offshore storage location. In recent years RCI went quiet, and the project website went offline.

Financing for Porthos has not been secured yet. The project applied for funding from the European Union and is presently preparing for an Environmental Impact Assessment. The effectiveness and safety of permanent underground storage of CO₂ has been broadly questioned. Inter alia, the CO₂ could leak out due to underground movements such as earthquakes.

In India, two provincial states relaunched their cloud seeding activities. The Maharashtra State government initiated the Maharashta Rainfall Enhancement Project in 1973. The long-term program was carried out with irregular breaks, due to high costs and the rather controversial effects of cloud seeding. The last cloud seeding flights were carried out in 2003, 2004, and 2015. After droughts, the Maharashtra cabinet approved $4.3 million USD for cloud seeding activities in 2019. The flights over 1.600 km² of seeding area were slated to start by the end of July and will last for one month. The regional government hopes to increase rainfall by up to 40 %.

The Karnataka provincial government announced the Varshadhaare project, a cloud seeding project, in 2012. In recent years, the province has been seriously affected by droughts. In response, the regional government relaunched the project and announced cloud seeding operations during the monsoons of 2019/20 and 2020/21 with a seasonal budget of $6 million USD. Cloud seeding activities will be carried out by plane, spraying silver iodide or sodium chloride above the catchment area of the rivers of Cauvery, Malaprabha and Tungabhadra. The region has already seen earlier cloud seeding activities by plane: the Varuna project was active from 2003 to 2004. According to 2017 press reports, the project did not successfully increase rainfall.

The research consortium ISIS (In-Situ Iron Studies) shut down its website in 2019. The consortium was formed to promote open ocean fertilisation experiments and discussed the conduction of an outdoor fertilization project. ISIS activities were probably terminated due to financial problems. In an interview, ISIS co-chair R. Lampitt mentioned problems to secure funding for experiments.

The Earth Ocean and Space Pty Ltd (EOS) website was also shut down, and EOS seems to have ceased its activities. EOS was founded in 1993 and developed ocean fertilisation technology in partnership with Sydney University. EOS licensed the Ocean Nourishment Corporation Pty Ltd (ONC) to commercialise its Ocean Nourishment™ technology. Ian S.F. Jones, an adjunct professor at Sydney University, directed EOS and is head of ONC. He is also CEO for the Ocean Nourishment Foundation Ltd (ONF), a not-for-profit organization, dedicated to ocean fertilisation. According to the websites, ONC and ONF are looking for contracts (and funding) to commercialize their activities.

KIFES, the Korean Iron Fertilization Experiment in the Southern Ocean, is a research project led by the Korean Polar Research Institute (KOPRI) and carried out in cooperation with domestic and international partners. In 2016, KIFES announced plans to carry out ocean fertilization tests in the eastern Bransfield Basin, near the Antarctic Peninsula. During a London Convention Meeting in 2017, the project didn’t find approval. Despite this, in 2018, iron fertilization activities were announced for 2019: KIFES aims to perform at least 2 iron additions, adding 2 tonnes of iron at a time, covering 300 km² of ocean surface. However, no details are available on the exact schedule and whether the project will be carried out or not.

There are also no recent updates on open-air ocean fertilization experiments announced for 2018 by Oceaneos Peru S.A.C. and the Chile-based Oceaneos Marine Research Foundation. Oceaneos Peru was founded in 2016 and is, since then, seeking permits and funding for ocean fertilisation experiments in the Peruvian Departments of Ica, Arequipa, and Moquegua. The filed requests were not approved, because of objections from Peru’s Institute of the Sea. The Oceaneos Marine Research Foundation in Chile was founded in 2014 and filed similar requests, seeking permits from the Chilean government to release up to 10 tonnes of iron, 130 km off the coast of Coquimbo. There are no recent updates on the planned iron releases, but Oceaneos continued searching for funding in 2018. The people behind Oceaneos are the same who formed the Haida Salmon Restoration Corporation, involved in the 2012 ocean fertilisation event west of Canada.

Another project behind schedule is the Stratospheric Controlled Perturbation Experiment (SCoPEx). The Solar Radiation Management (SRM) project, carried out by Harvard University, announced the first outdoor experiments for the first half of 2019. The SCoPEx field tests aim to disperse particles from an instrument housed in a gondola that hangs beneath a high-altitude balloon. The particles planned for release include ice, calcium carbonate, sulphates and “other materials”. The balloon will be steered from the ground and includes sensors for data collection. The data will be used for modelling, aiming to predict larger-scale effects of Stratospheric Aerosol Injections. In February 2019, the US-based “Raven Aerostar,” a company specialized in stratospheric (high-altitude) balloons and airships, was chosen as balloon partner. According to SCoPEx it is likely that the field test will be carried out in New Mexico, but the exact place and schedule have not yet made available.

The experiment can also be qualified as an interim step towards large-scale experiments. Such experiments are controversial due to unforeseen global risks, e.g. to the environment. In July, Harvard University formed an Advisory Committee, to take account of this criticism, but the panel consists of U.S.-based members only.

In May 2019, Inventys and Lafarge Canada Inc. announced the four-year pilot project CO2MENT. The project will capture CO₂ from Lafarge’s cement plant in Richmond, British Colombia, and test a selection of CO₂ utilization technologies. CO2MENT also aims to examine whether a commercial-scale project can capture and commercialize up to 1.1 million tonnes of CO₂ per year. Lafarge Canada Inc. belongs to LafargeHolcim, a global building materials group, and the energy company Total. Lafarge’s Richmond site produces more than one million tonnes of cement per year and is among the largest emitters of CO₂ in British Colombia. CO2MENT secured financial support from the Province of British Colombia, Canada’s federal government, LafargeHolcim, and Total.

Cambridge University announced the launch of the Centre for Climate Repair in May 2019. The centre is described as new geoengineering research lab, aiming to explore ways to reduce emissions as well as technologies to reduce greenhouse gases in the atmosphere. Geoengineering approaches, such as solar radiation management, BECCS and ocean fertilization will be on the centre’s research agenda. The centre will be part of Cambridge University’s Carbon Neutral Future programme. Details on the centre’s financial budget and exact working programme are not yet available.

The US-based Wabash Valley CCS project was announced by Wabash Valley Resources (WVR), an affiliate of Phibro LLC. WVR plans to transform the former SG Solutions’ Gas plant near West Terre Haute, Indiana, into an ammonia plant, in combination with a CCS project. An annual CO₂ capture capacity of 1.65 million tonnes has been announced. The captured CO₂ will be stored two kilometres below the Mount Simon Sandstone, a saline sandstone aquifer. In May 2019, WVR secured investment from the Oil and Gas Climate Initiative to realize the project. The US-Department of Energy announced $10.2 million USD of funding, further investors provide $2.5 million USD of funding.

In June 2019, the British Drax project and C-Capture secured additional funding from the UK Government: C-Capture received a £5 million GBP grant to further develop its CO₂-capture technology. Drax Group received £0.5 million to study the feasibility of a second carbon capture pilot at its Drax Power Station. The Drax Power Station, located near Selby in North Yorkshire, is UK’s biggest power station, generating six percent of UK’s electricity. Drax began converting the coal-fired boilers to biomass in 2012, burning wood pellets instead of coal. Seven million tonnes of wood are burned each year, with the majority of the supply coming from the U.S. In February 2019, Drax started demonstrating the removal of CO₂ in a pilot trial. The trial is being undertaken in partnership with C-Capture, a spinoff from the department of chemistry at the University of Leeds. In addition, cooperation with the start-up Deep Branch Technology has been announced, aiming to study the production of proteins from captured CO₂.

The provincial government of British Colombia, Canada, announced 25 million CAN$ support for Carbon Engineering, in June 2019. Carbon Engineering, a company founded by David Keith (Harvard University) in 2009, developed a Direct Air Capture (DAC) technology, able to remove CO₂ directly from ambient air: A strong hydroxide solution acts as chemical absorbent. The liquid sorbent captures CO₂ and converts it into carbonate. In the following step, the carbonate solution is dried and transformed into small pellets of calcium carbonate. When heated to temperatures above 1,500 degrees the pellets release the CO₂ and leave calcium oxide (CaO) behind. This procedure is very energy-intensive. The governmental funding will be used to expand Carbon Engineering’s DAC pilot plant in Squamish, British Colombia. Carbon Engineering also plans to design its first commercial DAC and AIR TO FUELS™ plant, aiming to produce liquid fuels based on captured CO₂ and hydrogen.

The Swiss DAC company Climeworks AG, a spinoff of ETH Zürich, started offering the removal of travel emissions. Climworks AG developed a DAC process, but the potential commercial markets for captured CO₂ are rather small (sparkling beverages, greenhouses) or not developed (synthetic fuels). Since June 2019, Climeworks offers removing travel emissions from ambient air by filtering CO₂ with its DAC technology and, in addition, by storing CO₂ underground in Iceland at the CarbFix project site. If the captured CO₂ is sold to greenhouses or beverage industry, it will be released back into the atmosphere at a later point in time. The underground storage of CO₂ is not well researched, in particular, there is no long-term research proving that CO₂ remains underground.