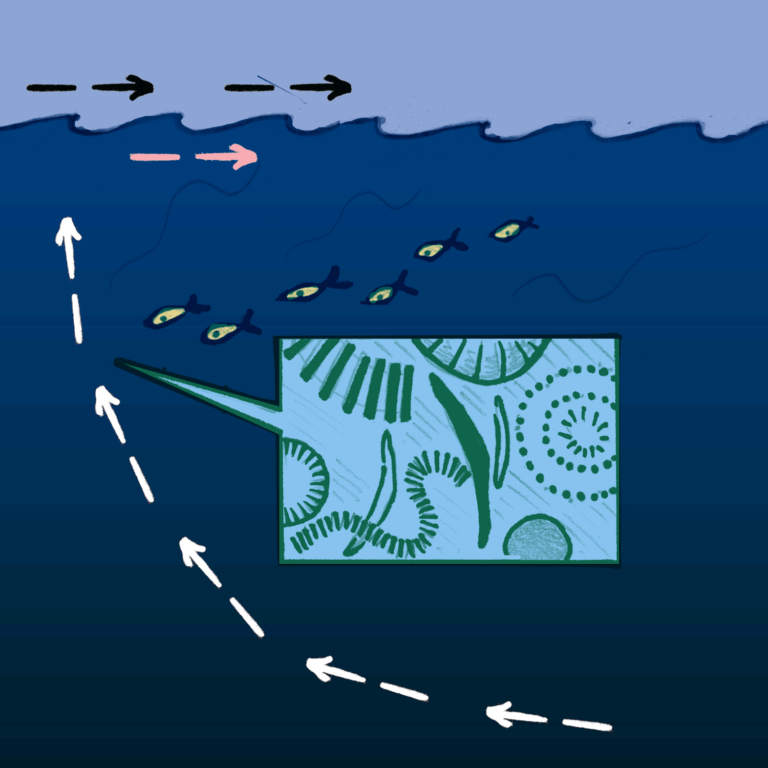 The US-based
Climate Foundation
revealed plans to intermingle ocean water layers in Australian and
Philippine coastal waters with the aim of sequestering atmospheric
carbon as well as stimulating the growth of phytoplankton and
macroalgae, and enhancing fish production. The foundation says it
obtained a permit to supply deep ocean water to a Philippine coastal
reef area and announced the launch of a project intermingling surface
water with deep ocean water in Storm Bay, Tasmania, for 2020.i

Introduction
to the approach

The
process of transporting deep ocean water to the surface is called
upwelling. Natural upwelling is caused by winds and the rotation of
the earth and intermingles the generally colder water from the deep
ocean with water in upper ocean layers. Deep ocean water (DOW)
is often rich in nutrients and can therefore increase primary
production in sunlit ocean layers, e.g. by enhancing the growth
of phytoplankton.

Since
a few decades, researchers have been investigating whether it is
possible and reasonable to extend natural upwelling areas
artificially. The research has been driven by the following
hypotheses:

(1) intermingling
of ocean layers may increase the growth of primary and enhance fish
production;

(2) an
accelerated primary production may raise the uptake and sequestration
of atmospheric CO2
by the ocean;

(3) cold DOW
may cool the overlying air and/or coral reefs.ii

During
the past fifty years, various upwelling technologies have been
developed and tested in the open ocean. About twenty outdoor
trials aimed mainly at increasing the upwelling efficiency while
reducing the energy demand. For example, electrical pumps have turned
out to be too expensive, and upwelling processes based on differences
in temperature or salinity have been too inefficient. New technical
developments being explored include upwelling pumps working with wave
power, or air-lift pumps upwelling DOW with compressed air and solar
energy. Most research has been carried out and funded by Universities
and public research institutions from China, European Union, Japan,
Norway, and USA.

Artificial
upwelling requires adding large structures to the ocean. The afore
mentioned outdoor trials used pipes to upwell ocean water from depths
of up to ~300 m, e.g. with tubes made of PVC, often connected to
diving platforms. If installed on larger scale, such structures could
cause issues for marine life, shipping and fisheries. Data on the
service life of such devices, possible impacts of the components on
water quality, concepts of waste avoidance, or maintenance
requirements and costs are incomplete or not available.iii

GESAMP1,
a body advising the United Nations on scientific aspects of marine
environmental protection, reviewed various marine geoengineering
technologies2,
among them artificial upwelling. The report concluded that the field
studies carried out to date did not submit evidence that artificial
upwelling can sequester carbon on larger scale. In addition, the
report names the following environmental and socio-political risks:

Termination
effect:
Artificial upwelling of colder DOW increases the absorption of heat
in the ocean. As soon the upwelling stops, the absorbed heat would be
released into the ambient air, resulting in additional warming of the
earth’s atmosphere.

Current
research activities are mainly being carried out by Chinese,
US American, and European actors.

In
China, Zhejiang University
is undertaking various research and modelling studies to improve the
energy management for artificial upwelling in coastal areas, while
boosting carbon sequestration and primary marine productivity. From
November 2018 to May 2019, an outdoor trial was conducted
in a coastal kelp farm located in Aoshan Bay,
Shandong Province. Offshore solar energy has been used as power
source for upwelling DOW during the kelp growing season,
covering an area of 0,8 ha. Water layers were intermingled
by rising air bubbles. In addition, kelp farming combined with
artificial upwelling has been modelled for three bays in Shandong
Province.

Since 2017,
the US Department of Energy is implementing the
MARINER (Macroalgae
Research Inspiring Novel Energy Resources) program. The program seeks
to develop the scale and efficiency of marine biomass production and
supports eighteen research projects. Among them is a project called
“Kampachi Farm – Single Point Mooring Array for
Macroalgae”. Kampachi Farm is a Hawaii-based mariculture
company. The project team at the farm is designing technologies to
enable large-scale macroalgae cultivation without the addition of
fertilizer. Upwelling of nutrients for the purpose of enhancing
growth of macroalgae is among the proposed solutions.

In 2019,
Kampachi Farms and Makai Ocean Engineering have
partnered for the Blue
Field Demonstration Project.
This pilot-scale offshore project aims to supply macroalgae with
nutrients by upwelling DOW. The upwelling devices include a
40 m² swimming platform and wave-powered pumps with pipes
extending to a depth of up to 300 m. The proposed site is about
3 km offshore of West Hawaii. The project is presently
awaiting the necessary state and federal permits for deployment. The
pilot is designed for a period of three years, and the intended
start time is October 2019.

The
Climate Foundation (TCF),
a US-based NGO, founded in 2007 and directed by Brian von
Herzen, published plans for artificial upwelling activities along the
coasts of Australia, Africa, America and Asia. In 2008, TCF developed
wave-powered upwelling technology and tested the device in the open
ocean, about 100 km north of Hawaii.
In 2016, the foundation was among the ten winners of the
Australian “Blue Economy Challenge”, an initiative led by
the Australian Department of Foreign Affairs and Trade. TCF announced
that the grant money will be used to establish its wave-powered
upwelling technology along the coastline of Zanzibar,
aiming to restore productivity of seaweed production for
10.000 seaweed farmers. The implementation was announced for
2017, but there is little to suggest that the project has been
realized. Since 2018, TCF has staff based in the Philippines,
and plans to establish an upwelling system on Bohol, an island
located in the Visayas archipelago. According to the TCF website,
a permit has been obtained to operate in a coastal reef area. The
project’s goal is restoring productivity of red seaweed production
for 2,000 seaweed farmers. Another project has been announced
for 2020, in the Tasmanian Storm
Bay, Australia,
where TCF aims to restore kelp forests and store carbon by providing
its wave-powered upwelling technology. According to TCF the project
is carried out in cooperation with the University of Tasmania and the
INTREPID Foundation. In addition, TCF advertises its technology for
the cooling of reef water, e.g. for the growth and survival of the
Great Barrier Reef. TCF’s activities are being sponsored by
foundations, private donations, government grants and industry
contracts.

The
research project Ocean artUp
is funded by the European Commissions’ Horizon 2020 Framework
Programme. Coordinated by the German GEOMAR Helmholtz Centre for
Ocean Research, it aims to study the feasibility, effectiveness, and
associated risks of artificial upwelling as well as its potential for
increasing ocean productivity, raising fish production, and enhancing
oceanic CO2 sequestration.
The studies include field experiments in the subtropical
North Atlantic, and investigation of natural upwelling events
south of the Canary Islands is also planned. Artificial upwelling
trials are taking place in Gran Canarias’ Taliarte harbour in
so-called mesocosms. Mesocosms can be described as large test tubes,
used to simulate a continuous upwelling situation. This year’s
“test tubes” are 2m in diameter, 4m in length, and each with a
volume of 8m³. In 2018, the mesocosms were used to test different
upwelling intensities. This year’s field trials started in
September 2019 and study the effects of different nutrient
ratios on plankton.v

Ongoing
research continues studying artificial upwelling as a potential mean
for CO2 removal.
Due to costs, and for implementation reasons, the research focus is
shifting to coastal areas and to a combination of artificial
upwelling with mariculture activities, e.g. seaweed farming. If
mariculture is combined with artificial upwelling and adopted on
larger scale, the above mentioned risks for marine life, shipping and
fisheries as well as the environmental and socio-political questions
and risks would intensify.

IPCC (2019):
IPCC Special Report on the Ocean and Cryosphere in a Changing
Climate. (Link: https://www.ipcc.ch/srocc/home/)