#OurNatureIsNotYourSolution: resisting geoengineering and other false solutions on International Day for Biological Diversity 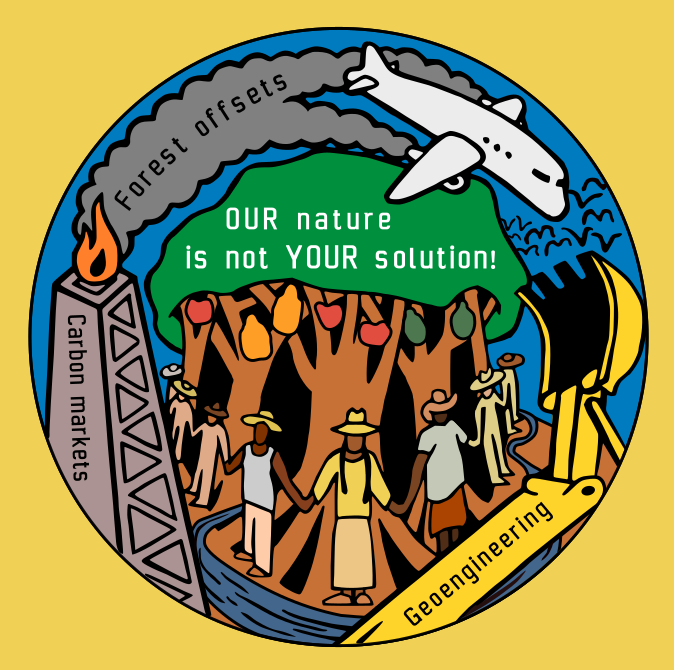 May 22nd is International Day for Biological Diversity, and the theme chosen by the United Nations this year is “Our solutions are in nature”. This is a clear reference to Nature-Based Solutions (NBS) as a strategy for mitigating climate change and biodiversity loss. At the forefront of these so-called solutions is afforestation, where vast areas of commercial monoculture tree plantations are set to be planted across the globe in order to soak up carbon from the atmosphere. In many cases, polluting industries will then be able to buy credits generated by these plantations to offset the carbon that they will keep pumping back into the atmosphere.

In response, the Global Forest Coalition is saying #OurNatureIsNotYourSolution, to denounce false solutions to the climate and biodiversity crises and the corporate capture of policy-making. GFC is asking member groups and allies to join in on social media on the 22nd against NBS greenwashing, and to spotlight ecosystem-based, community-led and gender-responsive approaches that are of far more benefit to the climate, biodiversity and communities.

Despite the urgency set out in the Paris Agreement and its 1.5°C target, governments and corporations have continued with business as usual, and many of the mitigation commitments made to face the climate emergency are still heavily focused on false solutions. These include carbon offsets, emissions trading and monoculture tree plantations. Increasingly supported with climate finance, these commercial activities dressed up as emissions reductions are little more than greenwashing.

The term Nature-Based Solutions (NBS) was introduced in the early 2000s as an umbrella concept for ecosystem-based approaches to mitigating climate change and biodiversity loss, but has gained much momentum in the last two or three years. Unfortunately, this concept has already been twisted by vested interests to falsely brand highly questionable practices as “green” and rebrand old schemes and scams with a catchier name.

The link between geoengineering and NBS is tree-planting, where afforestation and reforestation with tree plantations are key Carbon Dioxide Removal (CDR) strategies. In recent years, tree-planting fever has taken hold with governments and the private sector increasingly committing to planting more and more trees and “restoring” millions of hectares of ecosystems. One of the first initiatives was the Bonn Challenge, launched in 2011 to restore 150 million hectares of the world’s deforested and degraded land by 2020, and 350 million hectares by 2030. More recently, “1 Trillion Trees” was launched at the 2019 World Economic Forum.

Oil giants such as ENI, Shell, and Total have also embraced afforestation and restoration initiatives and pledged to plant millions of trees. In doing so, they are claiming that their emissions are being offset by new tree growth, which allows them to continue polluting as normal and avoid real emissions cuts. Australian oli and gas company Woodside Energy has already invested over A$100 million dollars in biosequestration across Australia, for example.

International public climate finance is similarly turning to afforestation with commercial tree plantations, and a recent example of this is the Arbaro Fund, which will create 75,000 hectares of tree plantations across seven countries in the Global South over the next 10 years. Despite strong opposition from civil society, earlier this year the Green Climate Fund (GCF) granted it 25 million USD in co-financing.

Planting native trees in order to restore forest ecosystems has a vital role to play in mitigating the impacts of climate change and protecting biodiversity, but efforts must be led and governed by local communities, Indigenous Peoples and women. This is, however, generally far from what corporations and governments have in mind. In fact, an assessment of government pledges made under the Bonn Challenge last year found that tree plantations were the most popular “restoration” option, with 45% of all commitments involving planting vast monocultures of trees. Such plantations can lead to land grabbing, rights violations, soil erosion, fresh water depletion, biodiversity loss and many other impacts. Plantations also store a fraction of the carbon that natural forests can, and emissions from land clearance and displacement of other land uses (e.g. agriculture) often totally undermine any mitigation potential.

It is imperative to continue unmasking and denouncing false solutions under whatever name they take, and to push back against the corporate-capture of climate and biodiversity policy-making. Join the Global Forest Coalition on 22nd May to say #OurNatureIsNotYourSolution.