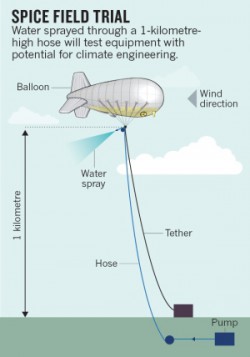 A British experiment to test technologies that could one day be used to manage the climate has been put on hold, in part due to the objections of environmental groups.

The Stratospheric Particle Injection for Climate Engineering (SPICE) project is little more than a balloon with a hose attached. The stated goal of the project is to test technologies that might someday be used to cool an overheating Earth. The test bed will pump water through a hose to a balloon, which will disperse it as a spray a kilometre above the planet. The primitive contraption is a forerunner to larger balloons that might eventually deliver sulfate aerosols at heights above 10 km. In theory, the aerosols will reflect sunlight away from the Earth’s surface and cool the planet.

SPICE is a modest £1.6 million (US$2.5 million) effort, and the balloon test is just a small portion of it. But the project sends the wrong message, according to some environmental groups. In a letter sent earlier this week to Chris Huhne, Britain’s climate minister, they state that the experiment violates a decision not to undertake large-scale geoengineering tests made during the last meeting of the Convention on Biological Diversity. It also says that the experiment will undermine Britain’s role in ongoing climate negotiations. The campaign is being spearheaded by the ETC group, well known for trying to halt the development of nanotechnology. But among the signatories is Friends of the Earth, a more mainstream organization.

The balloon test, at an air base in Norfolk, was originally set for mid-October, but is now on hold, according to Matthew Watson, SPICE’s principle investigator and a scientist at Bristol University. ETC claims that their letter halted the project, but Watson says the decision actually resulted from an independent consultation. An ethical advisory group worried that Watson and his colleagues had not done enough to engage with environmental groups prior to announcing the test.

Watson says that he welcomes debate from environmentalists. He also emphasizes that the test will in no way alter the climate locally or globally. “We would have sprayed two bath tubes full of water over a field,” he says. The point of the test, should it proceed, he says, is merely to see whether balloons are a feasible geoengineering technology.