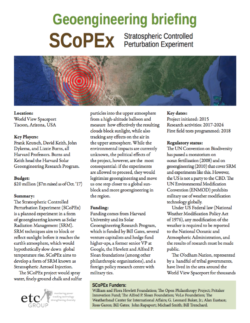 The Stratospheric Controlled Perturbation Experiment (SCoPEx) is a planned experiment in a form of geoengineering known as Solar Radiation Management (SRM). SRM techniques aim to block or reflect sunlight before it reaches the earth’s atmosphere, which would hypothetically slow down  global temperature rise. SCoPEx aims to develop a form of SRM known as Stratospheric Aerosol Injection.

The SCoPEx project would spray water, finely-ground chalk and sulfur particles into the upper atmosphere from a high-altitude balloon and measure  how effectively the resulting clouds block sunlight, while also tracking any effects on the air in the upper atmosphere. While the environmental impacts are currently unknown, the political effects of the project, however, are the  most consequential: if the experiments are allowed to proceed, they would legitimize geoengineering and move us one step closer to a global sun-block and more geoengineering in the region.

Funding comes from Harvard University and its Solar Geoengineering Research Program, which is funded by Bill Gates, several venture capitalists and hedge fund higher-ups, a former senior VP at Google, the Hewlett and Alfred P. Sloan foundations (among other philanthropic organizations), and a foreign policy research centre with military ties.

The UN Convention on Biodiversity has passed a moratorium on ocean fertilization (2008) and on  geoengineering (2010) that cover SRM and experiments like this. However, the US is not a party to the CBD. The UN Environmental Modification Convention (ENMOD) prohibits military use of weather modification technology globally.

Under US Federal law (National Weather Modification Policy Act of 1976), any modification of the weather is required to be reported to the National Oceanic and Atmospheric Administration, and the results of research must be made public.

The O’odham Nation, represented by a  handful of tribal governments, have lived in the area around the World View Spaceport for thousands of years. The reservations where the tribal governments exercise extra-constitutional sovereignty under US law cover a vast area of southern Arizona, with traditional territories extending into Mexico. For example, the Pascua Yaqui Tribe’s offices are a 20 minute drive from the Spaceport that will be the SCoPEx staging area.

While the sovereign rights of tribal governments over airspace is an emerging legal area, the Air Force and others have signed Memoranda of Understanding with the tribal governments about their use of O’odham airspace, indicating that government agencies are aware that they have some rights. One lawyer has made a persuasive case that tribal governments have sovereignty over what happens in the airspace over their lands.

The environmental effects of SCoPEx are mostly unknown. The project’s web site claims that the amounts released by the project will be “very small compared to other routine releases of material into the stratosphere by aircraft, rockets, or routine balloon flights.”

However, the political effects of the project are easier to predict. As governments continue to fall short of climate targets, David Keith and other geoengineers will be able to point to research findings to bolster the case for larger geoengineering experiments. However, these are not dispassionate scientists, but entrepreneurs backed by venture capitalists who stand to become fabulously wealthy if governments should opt to move forward with an SRM project in the future.

If SCoPEx moves forward, it will contribute to entrenching technology, capital and public relations power of geoengineering and divert resources away from real climate solutions.

David Keith, among others, has proposed a suite of field experiments, some to test the effectiveness and risks of geoengineering and others to develop technologies for larger-scale deployment. The closest to execution is SCoPEx. This experiment would try to understand the microphysics of introducing particles into the stratosphere to better estimate the efficacy of different materials to reflect sunlight as part of an effort to develop SRM techniques. They first plan to spray water molecules into the stratosphere from a balloon 20km above the earth, to create a massive icy plume to be studied from the flight balloon. They then aim to replicate it with limestone or calcium carbonate, followed by sulphates.

In 2012, news broke that David Keith and Harvard engineer James Anderson were planning the first outdoor experiment in solar geoengineering. This would have involved the release of particles into the atmosphere from a balloon flying 80,000 feet over Fort Sumner, New Mexico. Their stated aim was to measure how releasing sulfate would impact ozone chemistry, and to test ways to make the aerosols the appropriate size.

The announcement came soon after a controversial proposed field test of another SRM scheme – the British government-funded Stratospheric Particle Injection for Climate Engineering (SPICE) – was cancelled after a global outcry. Keith bemoaned its fate: “I wish they’d had a better process, because those opposed to any such experiments will see it as a victory and try to stop other experiments as well.”

After media revealed Keith’s own experiment, it too was cancelled, and Keith shifted energies to a new incarnation of the project. In early 2017, he helped launch Harvard’s Solar Geoengineering Research Program, backed by several million in funding by billionaires and private foundations.

Now, Keith is covering his bases politically: he claims the amounts of particles released will be small, and  in an attempt to win support among civil society, the project says it will have an independent advisory process for the experiments. This is in keeping with what constitutes a problem with all small-scale experiments like this: the slow and careful accumulation of mainstream legitimacy for large-scale experiments in solar geoengineering in the media, scientific bodies, and institutions of governance, both regionally and globally—ultimately leading toward full deployment.