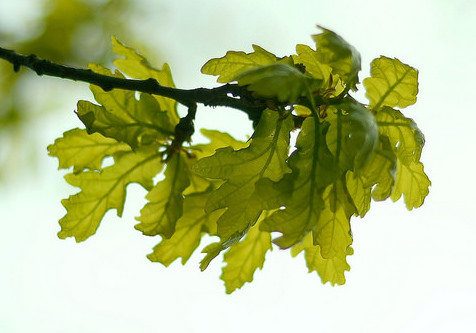 This week’s headline news from the world of technofix climate solutions is that a team of researchers led by the University of Illinois-Chicago has developed an artificial leaf. This leaf is a solar cell that uses the power of the sun to mimic photosynthesis and converts carbon dioxide into a fuel. Whereas a real leaf sucks up carbon dioxide and turns it into more tree, this artificial leaf turns it into a gas that can then be burned, releasing the carbon back into the atmosphere.

Climate Central’s story on this research lead with the line: “If humans could invent a leaf-like solar cell that could turn carbon dioxide pollution from the atmosphere into fuel for electric power plants, it could help reduce reliance on fossil fuels and cut emissions that contribute to global warming.”

Which is really quite amusing, given that millions of years of evolution has provided us with a perfectly adequate and natural leaf-like solar cell that can turn carbon dioxide pollution from the atmosphere into fuel, and certainly helps cut emissions that contribute to global warming.

Most uses of leaves and trees as fuel in electric power plants do make climate change worse of course, but humans have also been sustainably managing woodland on a small scale for thousands of years, such that forests and soils keep sequestering carbon, and humans get fuel and shelter. The key issue here being scale.

Here’s a thought: What if all of the research money currently being ploughed into false climate solutions, such as this artificial leaf, carbon capture and storage, and technologies involving solar radiation management or direct air capture, was put towards genuine and proven climate solutions instead, like regenerating natural ecosystems that have plants and trees with non-artificial leaves, and agro-ecology, where the trees and plants also have real leaves?

Maybe if we stop destroying perfectly good real leaves that already do a great job of removing carbon pollution from the atmosphere, no one will think there’s a need for artificial ones? Perhaps if governments and industry took climate change seriously and actually started drastically reducing greenhouse gas emissions, we wouldn’t even be talking about these ridiculous ideas.