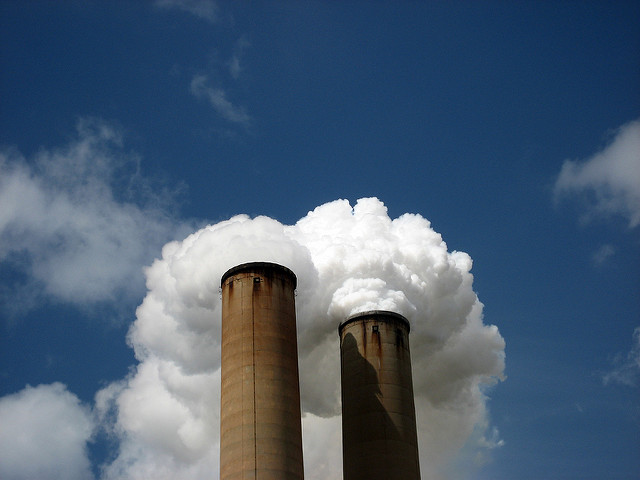 by Ryan Cooper (THE WEEK)

How can we solve climate change? One option is obvious, if a bit strange: If dumping carbon dioxide into the atmosphere is the problem, then we could always suck it back out.

If you think that sounds tricky, congratulations, you’re correct. However, scientists are increasingly relying on just this idea to construct workable future scenarios where global warming does not spin out of control. And the reason is that governments around the world have not been remotely equal to the task of keeping overall warming below 2 degrees Celsius, the level at which climate change becomes unacceptably risky according to the international Paris climate accords.

As a result, scientists crunching the numbers on how humanity might achieve this goal are increasingly leaning on outlandish assumptions about pulling billions of tons of carbon dioxide out of the atmosphere. The math checks out — but the science is not guaranteed to work, and it would be a lot easier to just implement proper climate policy right now.

Here’s the basic shape of climate change. In order to stay below 2 degrees, humanity can emit a sum total of roughly 1 trillion tonnes of carbon dioxide for all time. Emissions in 2014 were about 32 billion tonnes. We’re headed towards that limit at high speed — so to stay below it (without pulling anything out of the air) humanity must cut its emissions very fast, very soon.

Now, world emissions may have actually declined slightly in 2015 — an encouraging sign, but a temporary one. Renewable energy has been advancing fast, but it’s massive structural change and economic chaos in China alone that is responsible for the decline, not any sort of worldwide systematic attack on use of fossil fuels. What’s more, developing countries — particularly India — are projected to emit a lot more as their economies grow. As I noted two years ago, even if 2014 were to be a permanent emissions peak, staying under 2 degrees would require a crash course of decarbonization never seen in history outside of economic collapse.

So the only escape hatch is to pull carbon dioxide out of the atmosphere. In a new paper in Geophysical Research Letters, Benjamin M. Sanderson, Brian O’Neill, and Claudia Tibaldi examined what it would take to achieve the targets contained in the Paris climate accords — and most of their plausible future scenarios involve a years-long period of immense carbon dioxide removal. One plausible scenario for this involves biofuels (which would grow by pulling carbon out of the air, like any plant), and then sequestering the emissions far underground after the fuel is burned.

Staying under 2 degrees can happen if we get to net zero emissions on a fairly moderate course by 2085, for example — but it would require a long-term effort taking some 26 billion tonnes of carbon dioxide out of the atmosphere every year.

This sort of thinking is becoming more and more common as climate policy remains woefully insufficient. A pseudonymous scientist notes:

What I think is interesting is that negative emissions and temperature overshoots seem to now [be] becoming part of the narrative. One obvious reason for this is that we’re on the verge of leaving it too late to achieve these targets without them. We could still do so, but it would probably require drastic emissions reductions starting now… [And Then There’s Physics]

If we procrastinate much longer, it’s going to be nearly impossible to stay under that 2 degree limit. Meanwhile, climate change itself marches on. The last year has shattered temperature records across the globe, and seen multiple disasters of the sort predicted by climate models. The most powerful El Niño ever recorded has caused the worst recorded instance of coral bleaching, particularly hammering Australia’s Great Barrier Reef and the Maldives. Roads are buckling across Alaska as permafrost melts. Record heat in Siberia led to an anthrax outbreak among humans and reindeer.

The politics of climate change always seem tough. But it should be noted that it will be vastly easier to head the problem off now than it will be to fix it after we’ve let it fester for another couple decades. Carbon dioxide emissions are the product of several gigantic industries today. Creating a brand new industry to reverse the damage of other massive industries will be a terrifically expensive logistical nightmare.

And there’s also no guarantee that it will work on the scale required! Technologies to scrub carbon from the atmosphere are still in the early development stage. Historically, human ingenuity has solved such problems — but there’s no guarantee it will happen, especially if it needs to be done very fast. It’s completely possible we’ll run into unsolvable technical bottlenecks, and be forced to rely on hugely risky Hail Mary geoengineering efforts like partially blotting out the sun with sulfur dioxide.

Don’t think of technology predictions 70 years out as a promise. Acting to prevent climate change as soon as possible is always going to be the smart move.